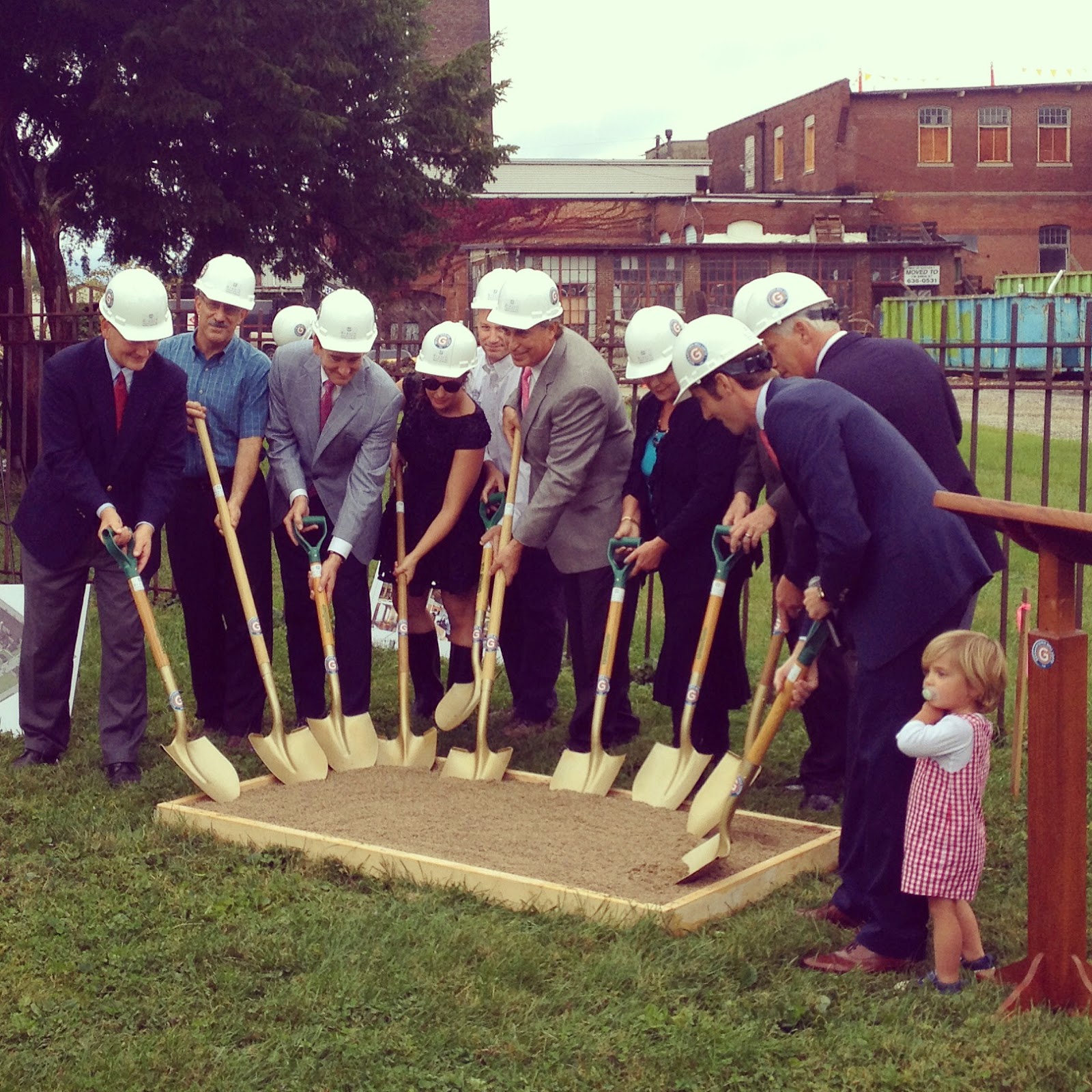 A large group crowded along the McHenry Street side of the former cotton mill as Underhill Associates broke ground on the Germantown Mill Lofts on Tuesday.  Among those who watched the Underhill's, Booker's, and their associates as they shoveled dirt from a box with gold shovels were community residents, local business owners, news crews and reporters, and local bigwigs, such as Metro Council President and District 10 Councilman Jim King.

The 184 units will range in price from about $700 (one bedroom) to $1,200 (two bedroom).  The lofts will feature high ceilings, granite countertops, energy efficient stainless steel appliances, original hardwood floors, exposed duct work, and large windows.  The large, arched windows are a major part of the renovation, carrying a three million dollar price tag on the project alone.

Instead of blocking out the railroad that runs alongside the mill, they are going to embrace it.  Four cabooses will run parallel to the tracks and offer additional rental space, whether for efficiency apartments or small offices.

Germantown Mill Lofts will have patios, ample green space, recreational sports courts (such as bocce ball), and even a swimming pool.  While they haven't signed any contracts or made any solid plans, they are hoping to attract a coffee house/mircobrewery, a cafe/breakfast eatery, and a wine cellar restaurant.  Suggestions from the neighborhood are encouraged for what commercial businesses they would like to see in the space (Have a great idea? Post it in the comments!).


The Underhill's have been very conscious of the neighborhood and how they can work with the community to make GML benefit everyone, not just their tenants.  The property will not have a fence around it.  There will be community meeting space in the building.  The gym and pool will offer memberships to anyone.   The retail and restaurant space on the ground floor will be open to the public.

Sure, the project is huge in the fact that it's a colossal building sitting on eight acres, but it's also huge in terms of the economic impact it will have on the area.  More local businesses will come, more visitors will seek out the area, and the influx of new residents will invest in new AND old businesses in the area.

All of this development also benefits greater Germantown's infrastructure.  While new businesses help transform the streetscape, city and neighborhood leaders can put greater emphasis on walkability improvements, traffic calming, and enhanced green space, such as along as Goss Avenue.

Remember the Goss Avenue Beautification Project?  The Underhill's are excited to help bring it to life; they're even moving their corporate offices to the old PVA building on Goss Avenue in November.  Jeff Underhill donated $250 to the Three Points Project that caps Goss Avenue to the West.  The owners of The Post credit GML for helping them secure a loan for their forthcoming pizzeria on Goss Avenue.

“We hope that this project will prove to be a vital catalyst for reinvestment in the area, complementing and encouraging other efforts in the area, including beautification of the Goss Avenue commercial corridor,” said Todd Underhill in a statement on their website.

Click the links below for additional information on the Germantown Mill Lofts and the groundbreaking ceremony: