An Evening With The Tiny Art Show at Four Pegs

If you’ve been to The Four Pegs Beer Lounge recently you may have noticed some art work on the wall.  Those paintings, pictures, prints, and multimedia combinations are all part of the Tiny Art Project, an effort to promote local artists and get their work out into the public eye.  I recently met with the founders of A Tiny Art Show – Tom Willis, Suzanne Sprawls, Scotty Haulter, Greg Toms, Laura Doll and three local artists as they planned their next show at a table on the patio of the Four Pegs Beer Lounge. All members of A Tiny Art Show, with the exception of Halter, live in the Schnitzelburg-Germantown neighborhood.

Sitting in on a Tiny Art Show planning session, if you can call it that, was an incredibly fluid experience – imagine  a meeting of the flying monkeys with a Gonzo vibe and you're almost there.  Several times during the course of the evening as the conversation channel-surfed through a barrage of unrelated topics - everything from the merits of minimalist art to the aesthetics of glazed buffalo wings - with dissenting opinions served up from all sides - I was reminded of that old joke about the Anarchist’s convention that had to be cancelled because nobody wanted to form a line at the registration desk. The Tiny Art Show doesn’t have a vision or mission statement or any real protocol for that matter (Robert’s Rule’s of what?).  However there is unanimity where it counts.  Tom Willis, one of the founders, put it this way, “If we had a mission statement it would be ‘Have Fun’ and as long we are doing that we will continue.” His comment drew a big collective nod from all heads around the table.

Like a lot of memorable inventions, the origin of Tiny Art project was due more to incidental circumstances than design.   Willis put down his chicken wing to explain: “It all started at Scotty’s party. I was talking to Suzanne about a photographer's work that we had both seen on Facebook.  We agreed that she should show her work.  Since the photographer didn't know anything about showing we decided to help her.  We were here at Four Pegs one night discussing it and I looked around and said, ‘What about here?’  I asked Smitty (the owner of Four Pegs) and he was cool with it.  So that got the ball rolling and we got together to organize it.”

The marriage of art and beer - or I should say beer and art, since there was unanimous agreement around the table that beer precedes art in the great ontological scheme of things - has been successful. 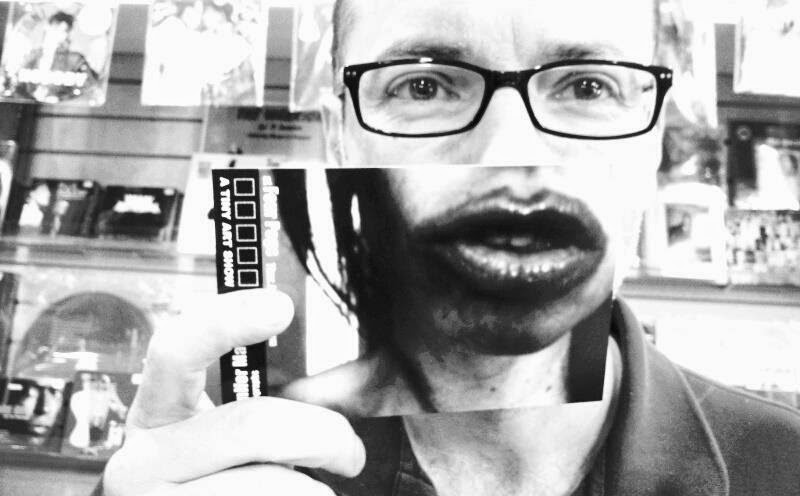 According to Tom it’s the kind of deal that works out to everyone’s advantage.  “The beer lounge gets a free artsy makeover and opening night brings in a lot of business because friends and family of the artists come to see the work of the people they know on display.  Artists love it because their work sells there is no cut for the bar or A Tiny Art Show.  We step them through the process that is important because most of the artists in our shows have never exhibited before.  That is a huge confidence builder for someone who is just starting out.”

So far the Tiny Art Show has produced four shows. The first two involved the work of single artists, and the shows carried the artists’ names. “Now,” said Suzanne, “we have multiple artists on display so we give the show names. We come up with titles based on a striking feature of the work or something thematically relevant.  Our third show was called Tres (three in Spanish) and the fourth was called vijf femmes (Vijf is Dutch for five and femmes is women in French.)  That show was so named because it featured the work of five female artists.”  The upcoming show has not been named yet.  Lots of suggestions were batted around the table.  Someone threw out “Three Guys Who Paint.”

The Tiny Art Project aims to be as inclusive as possible. Because these pieces are hanging in a bar, instead of a gallery, the group has to be mindful that the subject matter is appropriate for the general public.  This has not been a problem.  Aside from that there really aren’t any rules about submitting work.  Artists will frequently submit more work than the walls will hold.  This happens most typically with photos.   In this case the group gets together and does a triage, each member selecting a few of their favorites which are then further narrowed down by a group vote.  The artists are notified in advance about the selection with the understanding that they can override the panel’s choices if they disagree.  So far, that hasn’t happened.

How big can tiny be?  I wanted to know.  “Tiny,” said Tom, “refers more to the intimacy of the setting than the size of the individual pieces. We wanted to create a more informal environment than the established gallery setting.  We don’t have size specifications and would not exclude larger pieces, provided there is space for them.  We generally exhibit 30 pieces per show. But, of course, that depends on the size of the work submitted.”

Four Pegs is only place in town you can see the Tiny Art Show. And it is likely to stay that way.  “We thought about expanding to other venues,” said Susan, then added after a pause, “but then we wouldn’t be tiny anymore.”

The opening of the next Tiny Art Show is tentatively scheduled for September 18th.  If you are an artist and would like to show your work, or just want more information about "A Tiny Art Show" go to: atinyartshow.com

Thanks to Steve Cambron for writing and contributing this story.