What's a sharrow? And when are they coming?

Well, they actually already arrived. On Tuesday afternoon, you may have seen Louisville metro workers running around with stencils and paint, and by the next day, many of our major internal corridors were marked with a mystifying symbol. Old Louisville got them weeks ago, and elsewhere in town you probably see them popping up as well. 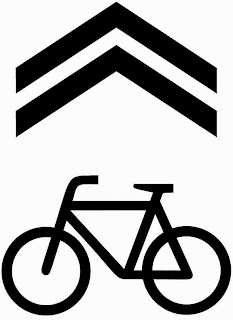 No, this isn't a boost pad for bicyclists, although if you play enough racing videogames you could be forgiven for thinking so (I'm always disappointed when I ride over one and don't get a burst of speed). Rather, it's a lane marking which is used as an alternative on medium-traffic roads to having bike lanes; on a road with less than 36 feet of travel width (which includes Hickory, Texas, and upper Shelby), there's not actually room to squeeze in full-size bike lanes, so sharrows are a way of accommodating bicyclists without using up limited space for cars.


So they have something to do with bikes. I figured that out from the symbol. But what do they do?

Surprisingly, they do absolutely nothing! They just remind people of something that's already true. KRS Chapter 189 identifies bicycles as vehicles, to which all sections of the vehicle code apply. KRS 189.300 specifically requires that vehicles stay as far right in travel lanes as roads as is practical. This means that bikes should be in the right-center of the travel lane, and the sharrows are an indication of the suggested position.

Nope. People suddenly opening car doors are a hazard to bicyclists (and to motorists, at that), so it's a lot safer for bicyclists to ride several feet out from the parking lane.


So what do I actually need to do in response to these sharrow things?

If you're a motorist, respect bicyclists on the road and understand their right to ride out a bit closer to the middle than you might expect. The city's specifically telling them to ride there, after all. On most of the sharrow-marked roads, it is legal to overtake bikers if you can do so safely (i.e. no oncoming traffic). Relax, take it easy, and realize that you lose almost no time going 15mph for a block or two. You're probably already doing that, so hopefully this won't affect you much at all.
If you're a bicyclist, make sure to position your bike on the right road location—a good ways out from the parked car lanes, riding with the flow of traffic, and definitely not on the sidewalk! Riding on the sidewalk is not only illegal, but is also very dangerous, not only to pedestrians, but also to the bicyclist. Ride boldly down that row of chevrons, secure in the knowledge that you are, in fact, where you're supposed to be.